FREE MASTERCLASS
Last updated on May 5, 2021 by Drew Swisher

Looking for the perfect EQ to add to your mixing toolbox?

This list of the eleven best EQ plugins in 2021 will help you find the perfect fit. They’re even organized by what they’re best at so you can immediately zero in on what you need.

Having the right tools is important, but they won’t help if you don’t know how to use them.

But if you just want to learn about EQ Plugins specifically, keep reading.

It’s worth mentioning that none of the companies who create these EQ plugins are paying us to write about them.

This article isn’t an advertisement for any one plugin maker. After trying out tons of different options, these are the ones we felt were the cream of the crop.

To help you find the right EQ quickly, here are some buttons you can use to zero in on the right match.

Click on the button that matches the type of EQ you’re looking for, and it’ll only show you EQs that match.

The stock EQ that comes with your DAW is superpowered. No joke!

The makers of DAWs know plugins are one of their biggest selling points. So they’ve really upped their game in recent years.

There’s a good chance you already have a great EQ on hand. 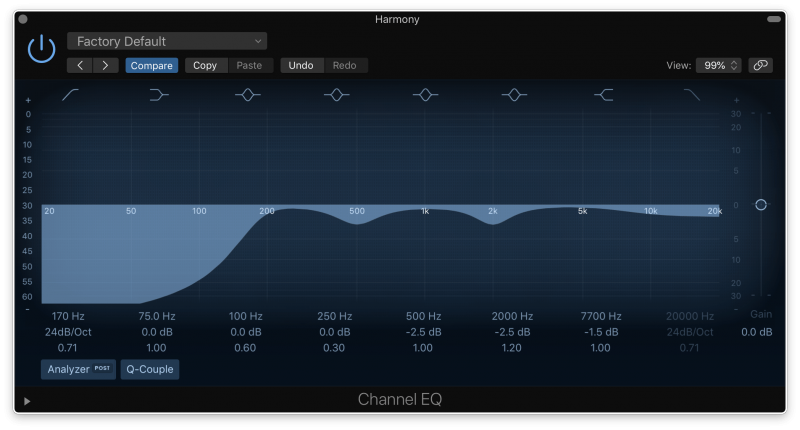 Logic’s parametric EQ is easy to use and even has mid-side functionality. There’s also a match EQ and several emulations of analog gear.

You should master your free EQs before you spend a cent. Why buy expensive gear if you don’t have to?

FabFilter have really outdone themselves with Pro-Q.

It can do just about anything you’d want an EQ for. It’s truly a master of all trades.

It has linear phase, mid-side, match EQ, and a beautifully transparent tone. Pro-Q 3 covers all the bases.

If you’re looking for a plugin that’ll cover 90% of situations where you need an EQ, Pro-Q is for you. It’s a workhorse EQ that deserves a place in any mixers toolkit

Now this is a unique EQ.

As the name suggests, MAutoDynamicEq is a dynamic EQ. 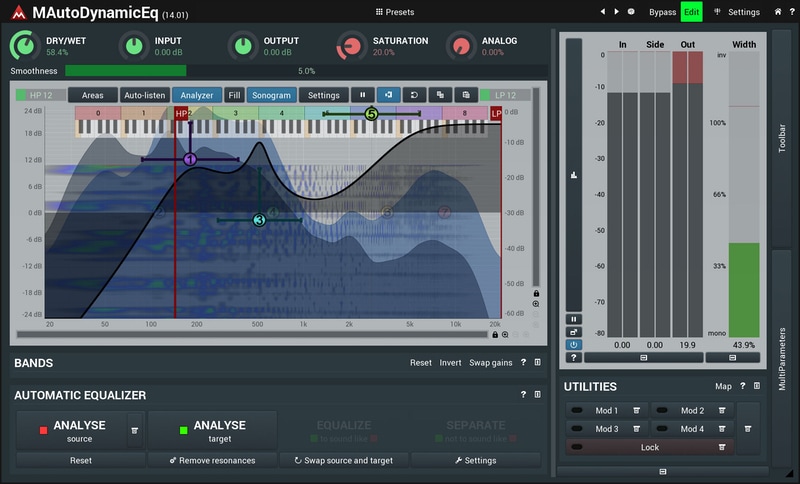 The seven dynamic bands make de-essing and removing room resonance easy. But it can do so much more.

By default, it’s a regular parametric.

The area displays make it user friendly. Allowing you to quickly zero in on troublesome frequency ranges.

Now let’s get into the bonus features.

It has two adjustable saturation knobs, dry/wet mix, mid-side capability, and automatic gain compensation. Melda Audio has given you pretty much everything you could want in an EQ.

There are four modulators, allowing for easy EQ sweeps that don’t require a bunch of automation.

Copy the EQ to another channel and click Invert. This is how you can apply the exact opposite EQ curve to the second track.

It’s not my go-to when I want that analog feel. But it’s terrific for mix cleanup.

Chandler Limited’s Curve Bender is one of the most famous mastering EQs of all time.

Beloved by engineers for decades, the Curve Bender has sweetened the sound of many hits. And now you can have it in your DAW for a fraction of the cost.

Softube has carefully modeled the sound of the Curve Bender. And they created an emulation that sounds great.

It adds beautiful air and presence to your master, helping it shine. You can also do mid-side processing. So homing in on a clear master is much easier.

The EQ in Ozone 9 is most famous for mastering.

It’s got mid-side and linear phase capabilities as well as match EQ. So it’s got all the bells and whistles you could want from a modern mastering EQ. 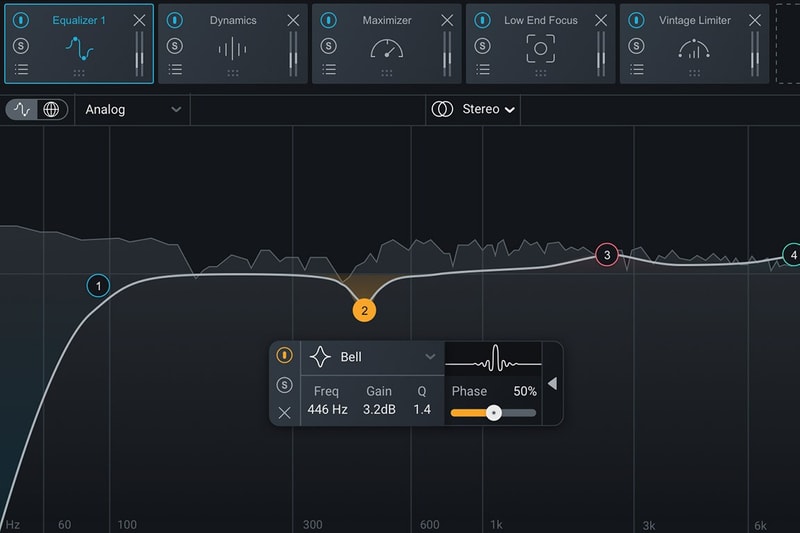 But it’s also great for mixing!

The match EQ can be useful for setting your mix bus EQ. Meanwhile you can use the mid-side to clear some mud.

But my favorite feature is the saturation profiles. The Ozone EQ lets you switch between analog and digital saturation.

You won’t be manually adjusting any frequency bands. There are no saturation knobs to crank.

Gullfoss is a smart EQ. It automatically boosts and cuts certain frequency ranges. 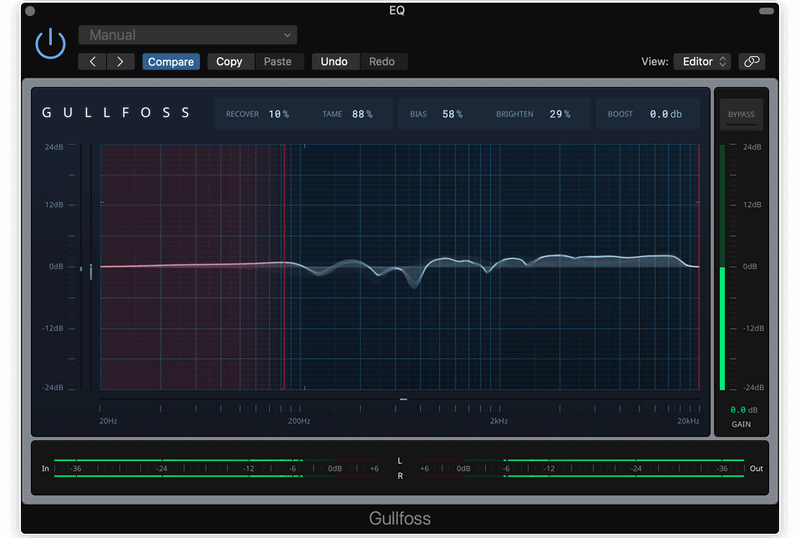 I don’t say this lightly: Gullfoss makes whatever you put it on sound better. It’s basically a magic wand.

There are only a few controls you need to worry about. Recover turns up frequencies that are being masked.

And Tame turns down frequencies that are masking others. It quickly increases clarity.

You’ll probably want to adjust the low frequency cutoff. This is the red line to the left of the plugin.

Bias and Brightness help you tune the recover and tame settings. This is how you adjust the tone of the EQ.

The NobleQ is modeled after my favorite analog EQ unit of all time – the Pultec EQP-1.

It’s really, really hard to make something sound bad with this piece of hardware. Use it on bass for some extra low end warmth. Use it on your snare for a little extra upper mids snap. For vocals, I use it to add a little high end presence. You can’t really go wrong with this one.

Check out the PSP NobleQ here.

The Burnley 73 is a faithful emulation of a Neve 1073 preamp/EQ.

It may not have a ton of features, but it sounds great. The preamp alone is worth the price.

Pushing the EQ into saturation opens up the sound, adding some width and warmth.

Be careful with the high shelf, though.

The 1073 was made during a time where mixes would be running through tons of circuits, rolling off the top end. The 1073 adds a powerful boost to the highs to make up for this.

As a faithful emulation, the 73 recreates this. So make sure you pay attention to those high frequencies! 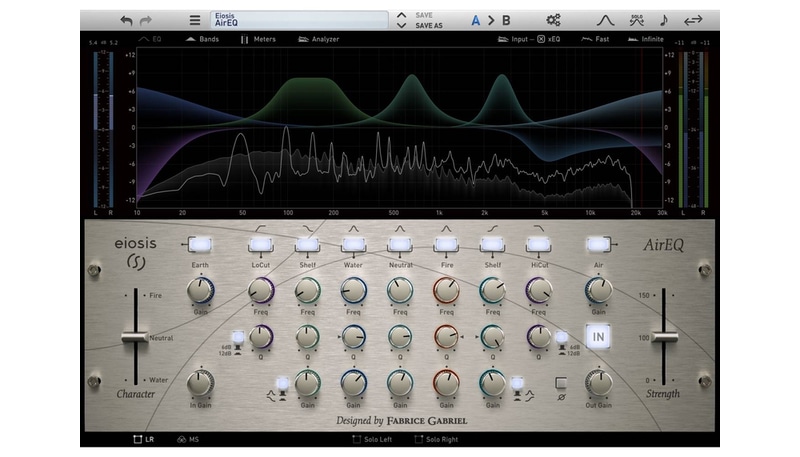 But it’s not just a visually striking plugin. It packs plenty of punch with its sound quality.

Earth boosts the low frequencies while Air turns up the highs.

But Water and Fire are where things get especially interesting.

Using the Character knob, you can dial the EQ in to sound more watery or more fiery. But what exactly does that mean?

Changing the character changes the resonance curve of each EQ band.

The center frequency is the loudest. And the frequencies around it increase and decrease in volume on an exponential scale.

Water flattens the resonance curve. So every frequency is boosted fairly similarly, and the center frequency isn’t louder.

This can be helpful when you want a really smooth boost or cut.

Fire narrows the resonance curve. Focusing the boost and cut almost entirely on the center frequency.

This is great for filtering out specific frequencies.

You may be wondering why we’ve called this a transparent EQ. The Earth, Air, Fire, and Water settings change the tone quite a bit.

But it doesn’t add much in the way of harmonic distortion. This is what we’re usually talking about when we say something sounds analog.

AirEQ will change the tone of your sound, but it won’t impart really noticeable saturation.

Nova is a six-band dynamic EQ. It’s kind of like an EQ and multiband compressor combined into one handy plugin. 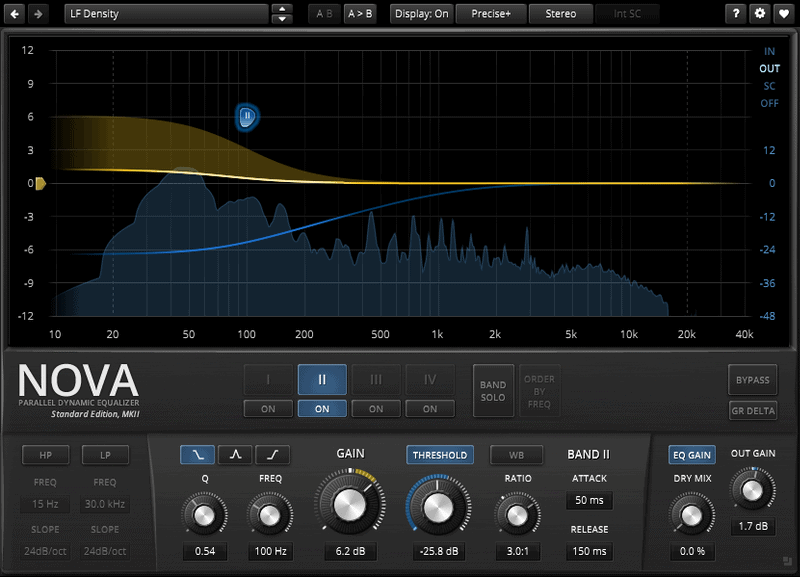 There’s a free version that comes with four bands instead of six. So check that one out if your budget is low!

What’s so great about PrimeEQ, aside from the price point? 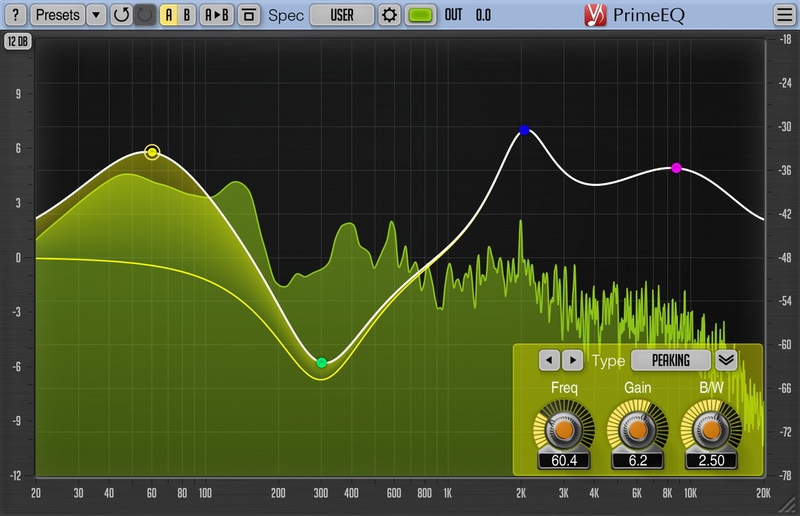 PrimeEQ has the smoothest workflow of any parametric EQ I know. Voxengo clearly prioritized ease of use when making this one.

Its UI is customizable. So if it doesn’t match your workflow, you can fix that.

And each instance of PrimeEQ has 32 bands. You can do some really in-depth EQing with that.

I’d recommend PrimeEQ for anyone.

But especially for beginners who want a parametric EQ that’s easy to use. Or seasoned vets who want a customizable EQ to suit their workflow.

No matter what kind of EQ you need, this list has you covered.

If you’re on the fence about which one to get, try them out!

All of these plugins have free demo trials. So you can make sure you like them before committing.

You could have all the right gear still end up with music that sounds amateur if you’re missing a crucial step.