Do you write songs that use chart-topping diatonic chords? (Those are chords built using notes of a major or natural minor scale.)

If so, there’s a chord that appears only once in the sequence.

It’s the diminished chord. Neither major nor minor but diminished.

The symbol for the diminished chord is a superscript circle above the letter of the chord. C° or just the rather insulting shorthand, dim: Cdim.

It can be tricky to know how to use it in a song. Plenty of songwriters, even chart toppers, never even bother.

I think that’s sad because a diminished chord adds serious flavor to your catalog. Making your songs sound super fresh!

But if you just want to learn about Diminished Chords specifically, keep reading.

What Makes a Diminished Chord?

Just like minor chords, the diminished chord has a flattened or minor third (♭3).

But its special diminished sound comes from the flattened or diminished fifth (♭5). Also known as the tritone.

The name diminished refers to the interval between the root note (R) and the fifth note (dim5 or ♭5) in the chord.

Yet the sound of the diminished chord has been variously described. Dissonant, unstable, tense, disruptive, and even scary!

But it’s exactly those qualities that make diminished chords so helpful in chord progressions. They deliver surprise and drama.

You can hear a diminished chord here. It’s the fourth chord in this introduction/verse chord progression of Maroon 5’s hit “This Love.” 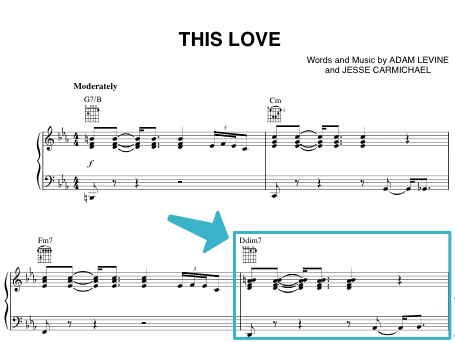 Meanwhile, in ABBA’s “SOS,” you can hear the diminished chord appear as the second chord when the verse starts. 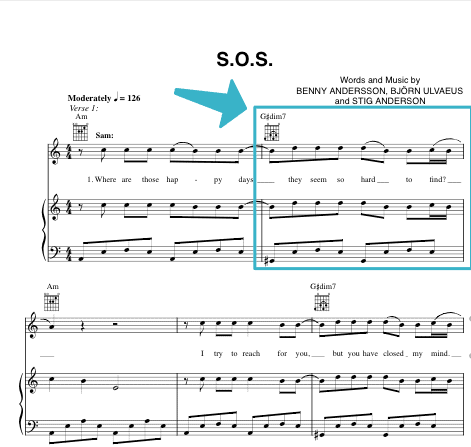 Both these examples show two helpful rules of thumb for using diminished chords in songs.

You make a diminished seventh by stacking another minor third on top of your diminished triad.

It has this unfortunate makeup:

Now before you lose the will to live with that mouthful…

Remember the chord is just three minor thirds stacked on top of each other, which looks like this.

On a keyboard, Cdim7 looks like this, and you can see each note is three half-steps or a minor third apart.

This makes a little more sense of the ♭♭7! 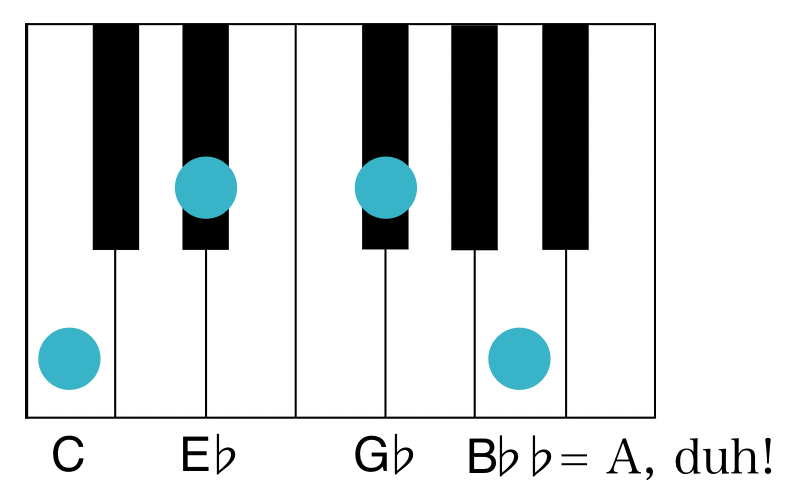 The diminished seventh has a party trick. Because each of the notes is a minor third apart, you can use any of the notes as the start or root note.

So Cdim7 is also E♭dim7, G♭dim7, and even B♭♭dim7 (Adim7). And you can play that shape up the fretboard every three frets, which sounds like this.

There are four notes in a diminished seventh chord, whatever the key. They wind up acting as a pull or leading note to either a major or minor chord a half-step or fret above.

Now this chord becomes super useful as the tension before a resolution (the storm before the calm!)

So you could follow Cdim7 with C♯ major—a major chord a half-step up.

Or you could follow Cdim7 with E minor—because E minor is a half-step up from the third note of the chord E♭.

You can also try replacing the archetypal V chord with a diminished seventh.

Say your song is in C major (I), and F major is your IV. Instead of the G major (V) as the penultimate chord, you can use C♯dim7 for an interesting twist.

Confession: I can tell that it works shamefacedly. Because I did it in complete ignorance in the first song I wrote that finally used a dim seventh.

You can insert a diminished seventh between any two chords in your song’s progression that are a whole step apart—major or minor. Put it on the half-step between.

Garth Brooks does this famously in his song “Friends in Low Places.” And his use of this technique made me reappraise his songwriting.

This song is in A major and starts on A major (1) followed by A♯dim7 resolving to B minor.

George Harrison does it 26 seconds into “My Sweet Lord.” It’s a half-step guitar sliding riff on Fdim7 between E major and F♯ minor.

If George can do it, so can you.

Tonic with a gin dim7

One use that’s pretty arresting is moving from the i chord (tonic) in a minor progression to idim7 (and that’s the gin!).

Dream Theater shows how effective this can be in their cinematic song “Fatal Tragedy.”

There’s a great deal to be said about these interesting chords, but this is a scratch on the surface.

The main thing is to try using a diminished seventh at some stage in your career. Even if you don’t release it.

Diminished chords are part of some of the top artists’ songwriting arsenals. From the relentlessly adventurous Beatles to worldwide sensation Adele.

All you have to do is unpack the minor third stack that creates a diminished seventh.