This is something I get asked about pretty often.

“My biggest struggle at this moment is mixing vocals. I have a hard time getting them to sit in the mix and still have fullness and texture.” – Howard Clark

“Some times no matter what I do to a certain instrument in a mix, I can’t get it to sit right” – Ambrose Gautier

There are lots of ways you could express this problem. Using the term ‘sit in the mix’ is just one of them.

Let me give you a common scenario:

You have an awesome song, and a decent recording.

In general the arrangement works, the instruments and parts compliment each other.

Most of it just kind of… fits.

But then there’s that one instrument or part that sounds COMPLETELY out of place.

And no matter what you do (EQ, compression, reverb) it just won’t ‘sit’ well with the rest of the track.

It sounds like it was recorded in another room (or even another planet).

It’s distracting. It obliterates the ‘togetherness’ of the track.

We want our mixes to sound ‘balanced’, ‘natural’ and ‘even’.

We don’t want our mixes to sound ‘disjointed’, ‘broken’ or ‘unnatural’.

When one part doesn’t gel with the rest of the track, it pops out at us and ruins the listening experience.

This is the problem we are explaining when we say we can’t get something to ‘sit in the mix’.

Today we’re going to talk about some solutions to one of the most common problems in mixing.

But before we start, make sure to grab my new eBook, Stop Mixing Vocals Wrong.

It’s my complete guide to mixing vocals at home. If you’re trying to make your vocals sound like they belong on the radio, this is the guide for you.

Grab it here, for FREE today:

Why does this happen?

There are a million reasons why you could be experiencing this problem.

Perhaps one part was recorded in a different acoustic environment (another room).

Perhaps the song generally has a ‘warm’, ‘dark’ sound; but one part sounds ‘sharp’ and ‘bright’.

You can think of a song as a combination of instruments with their own section or pocket in the frequency spectrum.

On the bottom end, we have the bass guitar and kick drum.

Then we have the vocals, the guitars and some of the drums.

Next we have the high register instruments and cymbals.

Each instrument has its own range of frequency that it covers and resides in.

When we have too many instruments in one pocket or section, it can get busy and cramped. These instruments will then become more noticeable and will stand out in the mix, as opposed to sitting nicely in their own little section.

No matter the reason, there are numerous ways to avoid or fix the problem.

And as I always say: it’s far easier to address the issue in the recording phase than trying to fix it in the mix.

Having said that, sometimes you are limited in your resources, time or space. It’s not always possible to fix this problem before or during recording.

For this reason I will also cover the best ways to make something sit in the mix using EQ, compression, reverb and levelling.

But first, here are some great ways to avoid the problem all together.

Work on the Arrangement

A lot of the time an instrument doesn’t sit in the mix because the arrangement needs work.

Don’t forget – a track is only as good as the musicians and music your are recording.

When songs are poorly written the parts clash and step on each others toes. This will quickly lead to one part standing out of the mix and not sitting right.

Here’s an example. You have a verse where the lead vocals and lead guitar both have a clear melody. But these melodies are in the same register.

One of these parts is going to very quickly ruin the ‘even’ sound of the track and not sit in the mix.

No matter how long you spend on frequency slotting and reverb, these parts will clash!

If you notice two parts clashing when you start recording, address the issue before continuing.

If it’s too late and you already have a final recording, try removing one of these instruments or re-recording in a different octave.

This is a great trick if you have two guitars playing at once. Use the bridge pickup on one guitar, and the neck pickup on the other.

This gives each guitar it’s own unique tone and space. It stops the two from sounding the same and clashing.

This concept doesn’t only apply to guitars.

Consider whether the tonal quality of the backing singers compliments or clashes with the lead vocalist.

Try using different plugin brands. Use different compression types to give each instrument a different tone.

Experiment with the tonality of different parts. Give each instrument it’s own unique sound (even if it doesn’t sound great on its own).

It will be far easier than messing with EQ in the mixing phase.

Consider the Sound of the Room

This is a very common problem that I see. Most of the song is recorded in one room, but one or two parts were later recorded in a different room and added in.

It tends to be the guitar or vocals that are added after the drums have been recorded in a larger room.

These parts then have a completely different character to the rest of the recording!

You can tell straight away when the vocals have been recorded in a small room. They don’t sit in the mix because you can literally hear the different room sounds.

The easiest way to avoid this problem is to of course record everything in the same room. But sometimes that isn’t possible or convenient.

Instead, try to overdub parts in a similar room.

Or, use absorptive materials to remove as much of the room sound as possible, such as mattresses and duvets. You can learn more about home made acoustic treatment in this free course about recording vocals at home.

You could also use a cardioid microphone close to the sound source. This will reject a lot of the room sound.

Although this is technically part of the mixing phase, it’s a very simple way to get a part to properly sit in a mix.

Before you start going crazy with EQ and compression, adjust your levels and see if it helps.

The smallest change can sometimes make a huge difference. It’s always worth spending more time on balancing than heavy effects such as EQ and compression.

If the vocal isn’t sitting right, it might be because another part is too loud. Or perhaps the vocal is a touch too loud. Experiment and trust your ears.

This is a great tip in all cases! Volume is one your most important tools, just before EQ.

Learn more about making vocals sit in the mix in this video:

This is something I get asked about pretty often. "My biggest struggle at this moment is mixing vocals. I have a hard time getting them to sit in the mix and still have fullness and texture." - Howard Clark "Some times no matter what I do to a certain instrument in a mix, I can't get it to sit right

If it’s too late, you can still fix it in the mix

Prevention and consideration in the recording phase is key. But there are of course ways to make something ‘sit in the mix’ using plugins.

Here are a few killer tips that could make a chainsaw sit with an orchestra (don’t take my word for it, though). 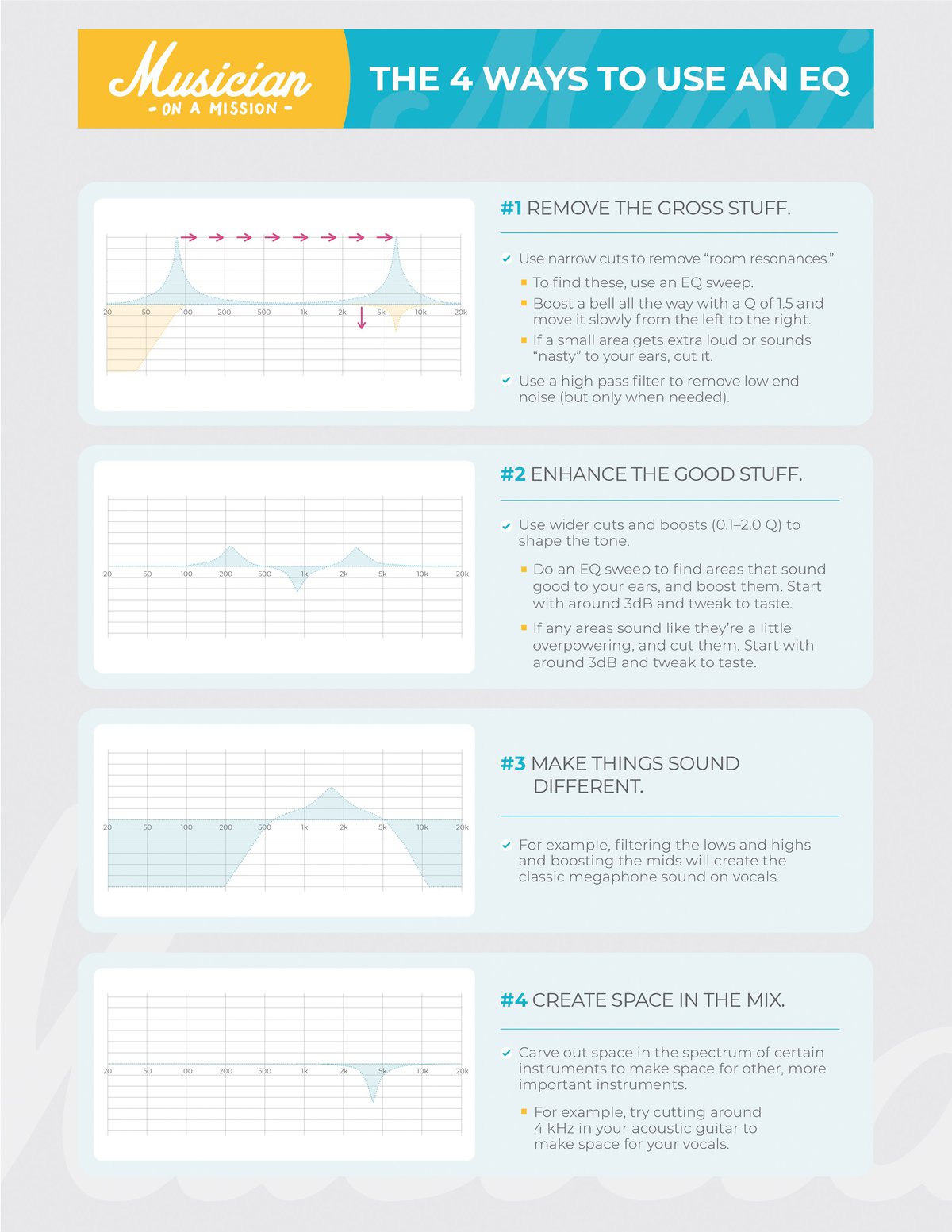 Tip #1 – Make space for the guilty part by frequency slotting. Vocals not sitting? Try cutting the guitars around 300Hz. Frequency slotting is much easier when you mix in mono.

Tip #2 – Be liberal with high pass and low pass filters. Never solo parts – instead engage the filter with everything else playing and bring up the frequency until it has a noticeable effect, and then turn it back a tad. This frees up more space for other parts.

Tip #3 – Does one instrument sound too in your face and have too much presence? Find the fundamental frequency of the instrument using your ears or a frequency chart and apply a broad but subtle cut around this frequency range. In general, this will be around the low mids, between 60-300Hz. 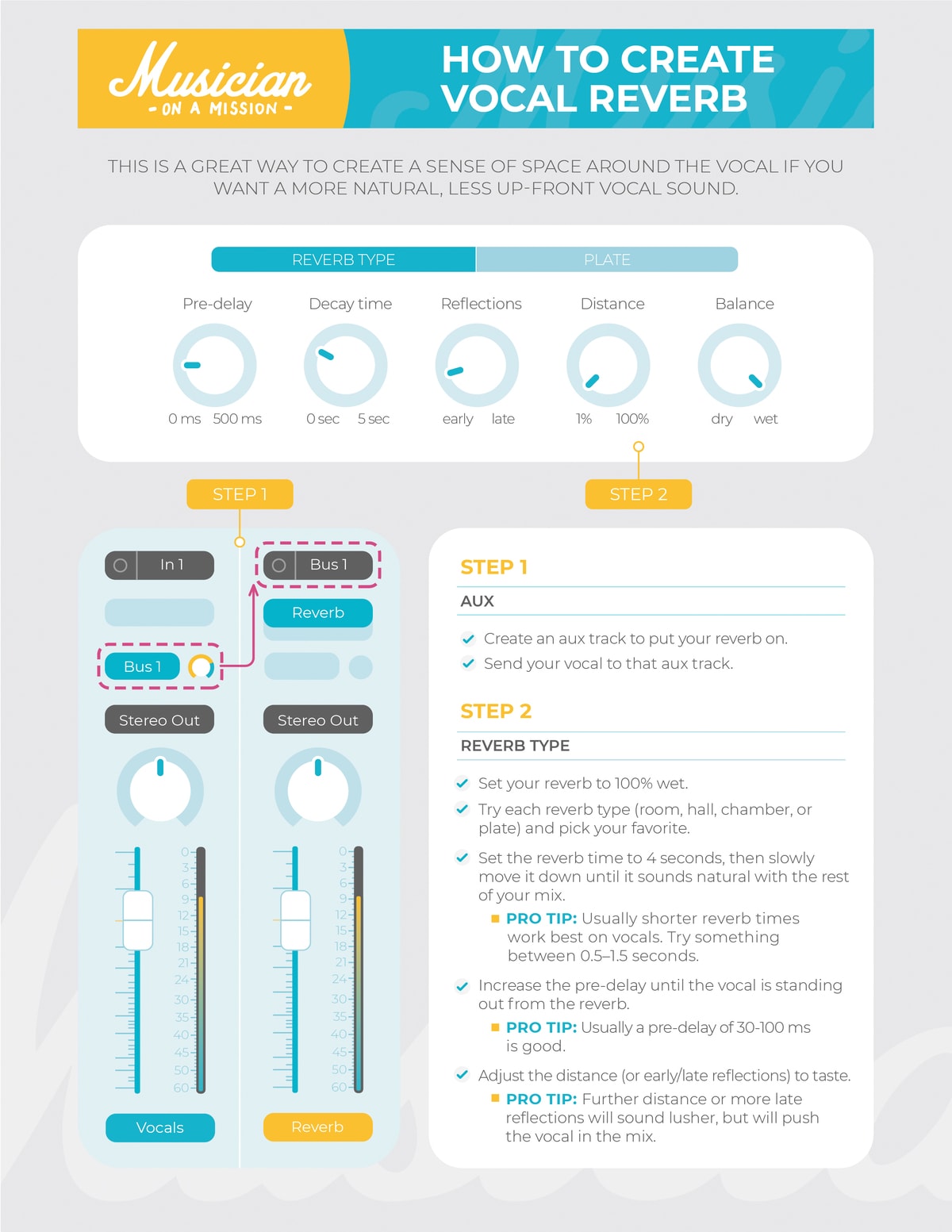 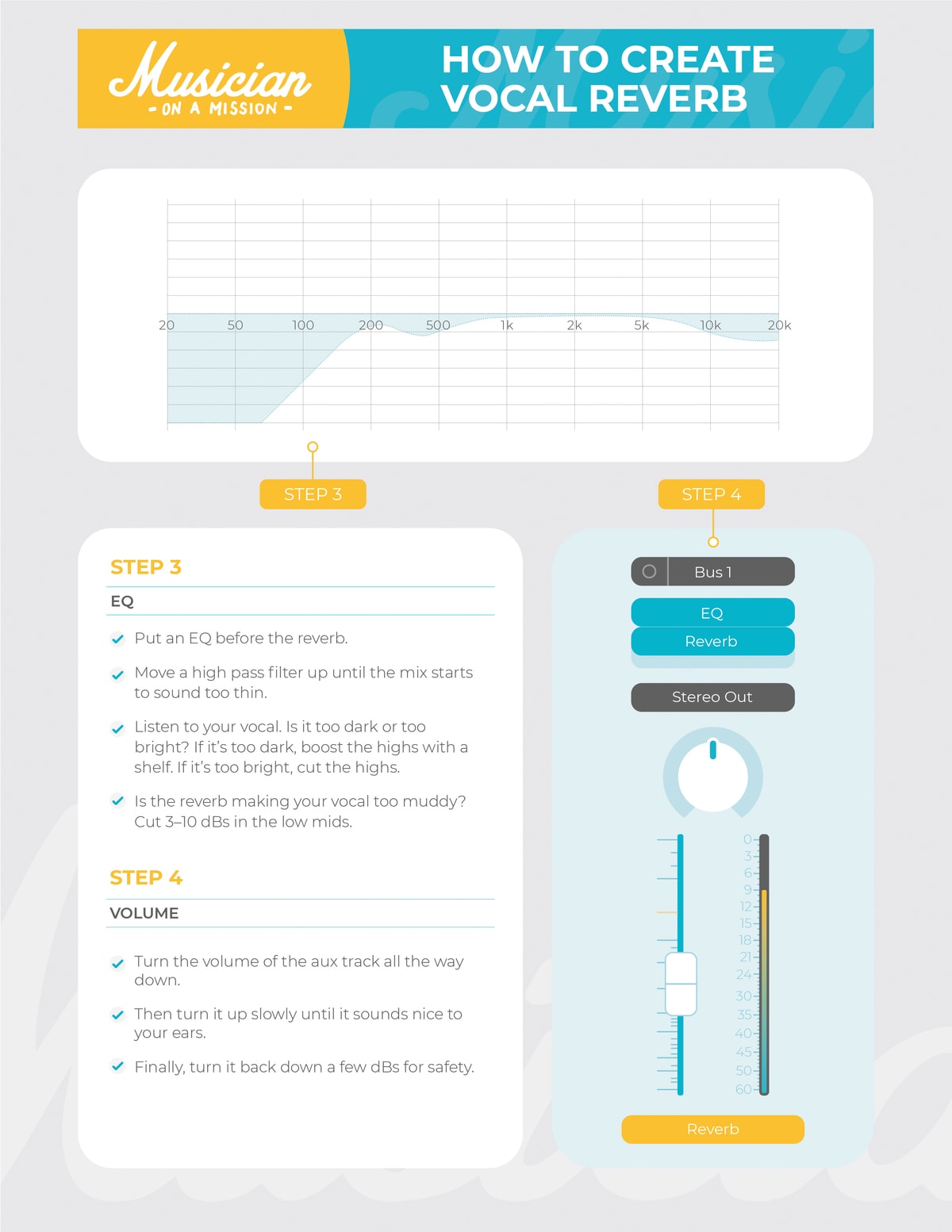 Tip #1 – Send everything to the same reverb effect using aux/bus sends. This puts it all in the same space, making your track sounds more cohesive and natural. You can vary the amount of reverb on each track by adjusting the level of the send.

Tip #3 – Experiment with using a different reverb on the vocals to make them stand out more if they won’t sit on top of the mix. Try a shorter reverb time or a plate reverb.

Tip #1 – Here’s a top notch trick to get your vocals to sit on top of the mix nicely. Send everything but the vocals to their own aux, and apply a very subtle compressor (only a few dB’s reduction). Side chain the lead vocals to this compressor. This will dip the track by a 2 or 3 dB’s every time the vocals come in. Remember to be subtle.

Tip #3 – Reduce the volume of backing parts (with automation) after they come in to make space for the lead parts. New vocal harmonies come in on the chorus? Start them a tiny bit louder to make their entrance noticeable, but then bring them down to free up the mix.

Tip #1 – If you have two instruments fighting for the same sonic space, another option is to pan them away from each other. Then they won’t clash and will sit in the mix better.

This is something I get asked about pretty often. "My biggest struggle at this moment is mixing vocals. I have a hard time getting them to sit in the mix and still have fullness and texture." - Howard Clark "Some times no matter what I do to a certain instrument in a mix, I can't get it to sit right

Hopefully you have a better understanding of how to make your vocals and instruments to sit in the mix.

Before you go, make sure to grab my new eBook, Stop Mixing Vocals Wrong.

It’s my complete guide to mixing vocals at home. It’ll keep you from making some mix-ruining mistakes!

Grab it here, for FREE:

7 comments on this article