Kick your mixes up a notch with mid-side processing.

It’s a great way to add energy and clarity to your songs. This guide will show you how (and when) to use mid-side plugins.

But if you just want to learn about Mid-Side specifically, keep reading.

We’re used to thinking of our stereo field as the left and right. We’ve got a left speaker and a right speaker 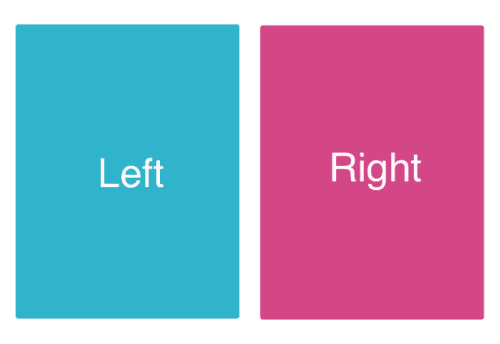 But with mid-side, we have sounds in the middle and sounds off to the sides. 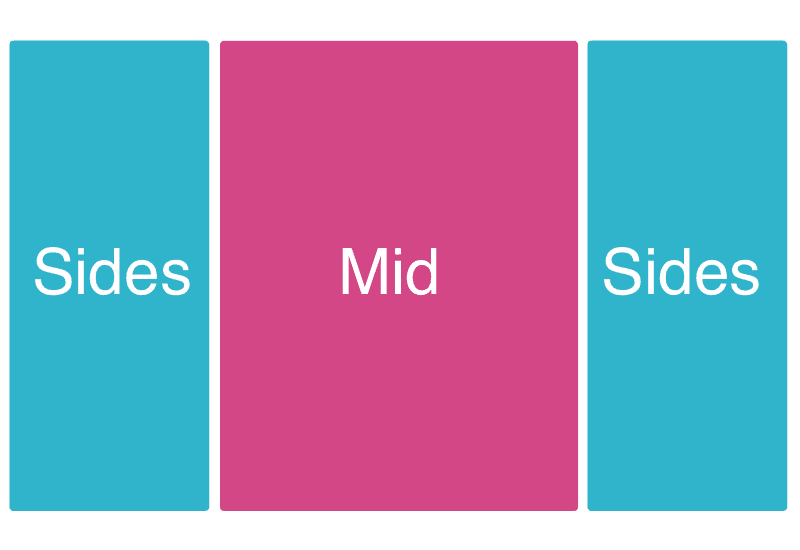 Mid-side plugins let you mix the center and sides of your song differently. For example, you could boost the low frequencies in the middle while cutting them from the left and right.

This can be a great way to increase the clarity of your mix, add energy, and even expand the stereo image.

Here’s how it works:

When Should I Use Mid-Side?

Also, the sound you’re working with needs to be stereo. A mono signal would only be affected by the mid processing.

Which means mid-side is often great for stereo-miked instruments, submixes, and bus tracks. It’s not useful for single instruments that were recorded with just one mic.

Give Your Songs an Energy Boost

One of the simplest ways to use mid-side is volume automation.

Using any kind of mid-side plugin, you can automate the center and side of a sound differently.

A really common way to use this is to turn up the side volume on drum overheads and guitars during big sections. This gives the mix a subtle (but effective) energy boost. 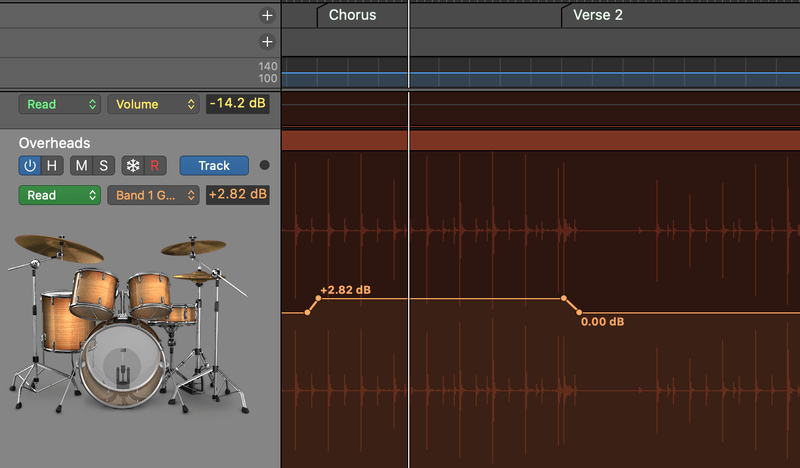 Alternatively, you could turn the sides down on a vocal during a verse to make it feel more intimate. Or vice versa.

As you do this, you’ll need to be careful about your overall volume balance. You can upset the overall volume levels of your mix, so keep your ears open!

Mid-side EQ is great for increasing the clarity of your mix.

One of the best ways to do so is surgically EQing the mids and sides to fix elements that are fighting.

For example, let’s say the guitar and vocals are fighting because they share the same fundamental frequency range.

We could turn down the fundamental frequency of the guitar, but it takes too much energy out. 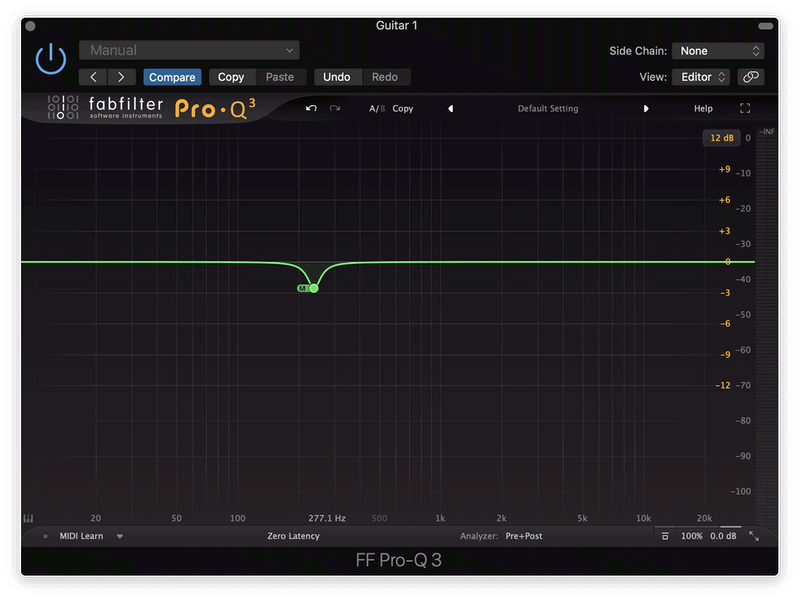 So instead, we could turn down the fundamental in the mid channel, preserving it in the sides. This gives the vocal enough space to cut through without hurting the guitar.

Are you using stereo expansion at all, whether on the mix bus or a specific instrument? You may have further use for mid-side EQ.

Stereo expansion tools are really great, but you need to be careful with them.

One reason is to avoid phase cancellation. But also to avoid widening the bass.

When low frequencies spread across the stereo field, they tend to overpower your mix.

Let’s say you add a stereo widener to the mix bus and you like how it sounds. But all of a sudden the bass is too big.

It’s occupying a much wider part of the stereo field than you want.

That’s where a mid-side EQ can help. You can add a high-pass filter to the sides and rein in those low frequencies. 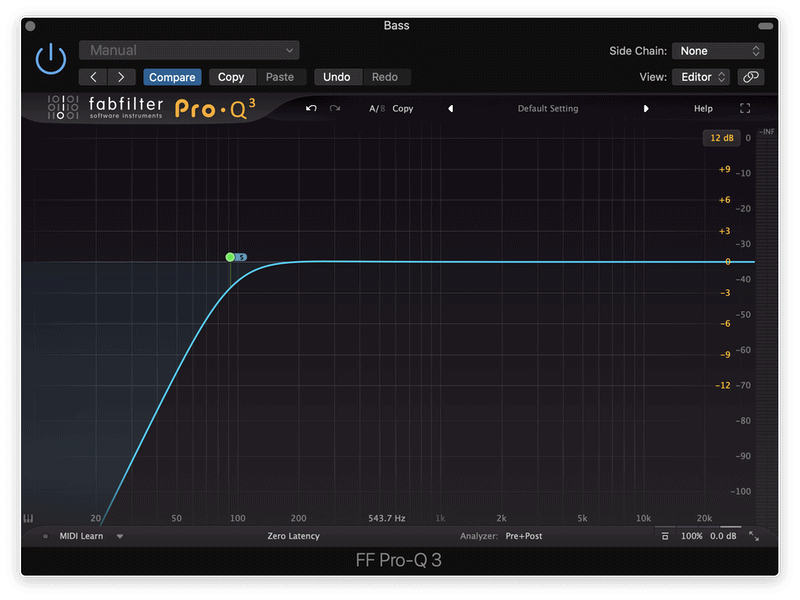 So if we cut the lows in the sides, we remove potential muddiness and center the bass.

Most subwoofers are mono, and our ears aren’t great at placing the direction of low sounds. So there’s not much risk of harming your mix by doing this.

You can also shape the tone with a mid-side EQ.

Maybe you want the mix to sound brighter.

But adding a high boost with a regular EQ messes up the volume balance. Or maybe it’s just too harsh.

By making that boost only on the sides, you can get the brightness you want without the downsides. 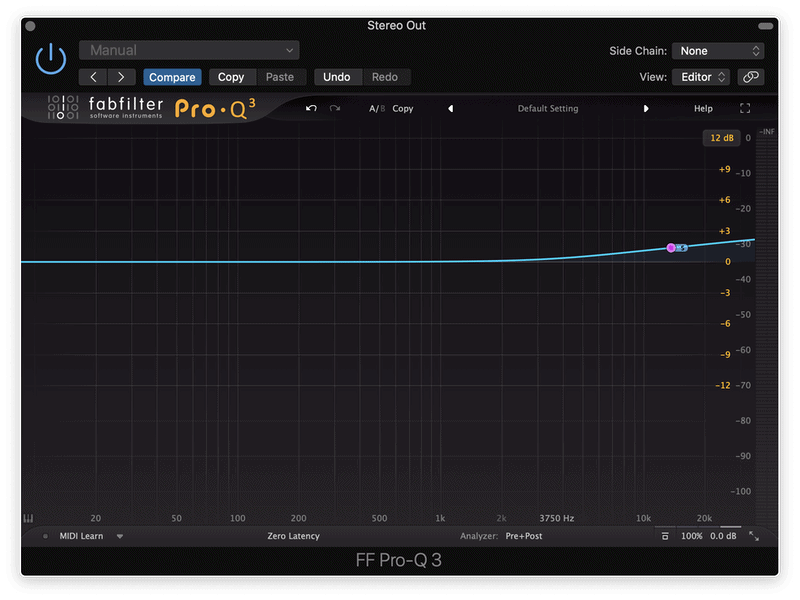 And of course you can do the opposite.

Maybe you want the mix to feel darker. But adding a low-pass filter to the whole sound undercuts the vocal.

You could add that low pass to the sides instead. 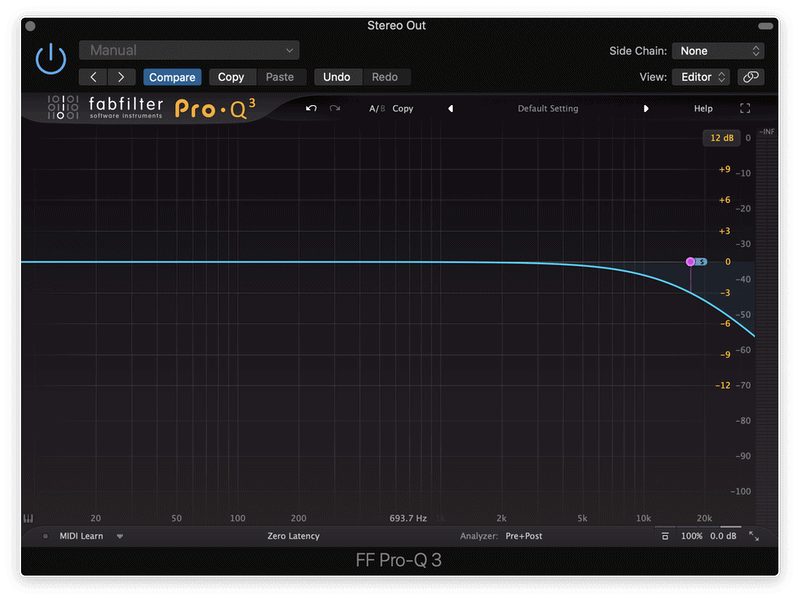 But of course, you have to be careful. When it comes to EQing the sides, it’s easy to go overboard.

So make sure you’re gain-staging and checking as you do this to ensure things actually sound better.

With mid-side compression, you can do all kinds of stuff to gain further control over your mix. A good example is adjusting a sound’s tone.

If you want something to sound looser or tighter, mid-side may be able to help with that.

First, add a mid-side compressor to a stereo track or bus. In this case, I’ll use a stereo guitar as an example.

Then dial in some strong glue compression. Something that’ll really get those initial transients pumping.

By applying this compression to the middle and adding our makeup gain, we can give it a looser feel.

On the other hand, if we compress the sides, it’ll feel tighter, like everything is being sucked into the middle.

And of course, you can do something similar if you want more compression but you want to preserve the transients.

Let’s say I want to rein in the drums. They’re too dynamic, but I don’t want to crush them.

I could compress the sides and leave the middle intact. That way, those initial hits still ring through.

You can use an exciter to add saturation to just the mid or sides.

If I wanted more shine on the sides, I could increase the saturation on the higher frequencies.

Or if I wanted to add more warmth, I could increase saturation on the low mids.

It’s similar to how you might use saturation in any mix context, but you can get a bit more precise.

Stereo widening from EQ boosts to sides are most noticeable when boosting mids.

It’s a common misconception that boosting the highs in the sides will increase perceived width. This isn’t really true.

Our ears are more attuned to spatial difference in the mid-range. Which means boosting the low mids in the sides is very effective for widening the space. 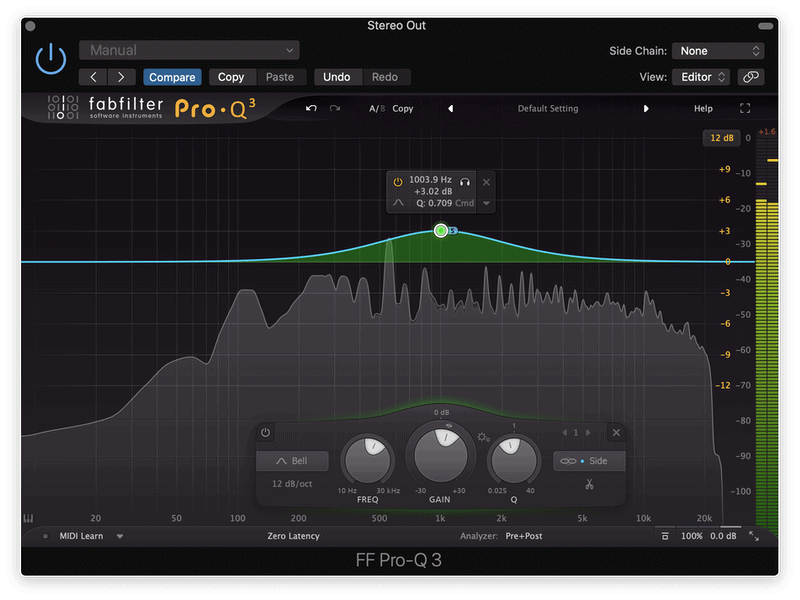 As we all know, just because you can do something doesn’t mean you should.

And that’s often the case with mid-side plugins. They’re powerful tools, but when used incorrectly, they can wreck your mix.

To be specific, you can upset your mix’s volume balance.

You’ve likely spent a decent chunk of time making sure your instruments sit well together.

Mid-side mixing can throw off that balance if you aren’t paying attention.

Think about how you use EQ and compression to shape the tone and balance of a typical mix. Then think about how mid-side changes that.

Get creative with these effects, but don’t make changes just because you can!

When used correctly, mid-side mixing can be a huge boon for your songs.

It can help you increase clarity or stereo width, get more dynamic control, and more. So keep these tips in mind the next time you load up your DAW!

3 comments on this article